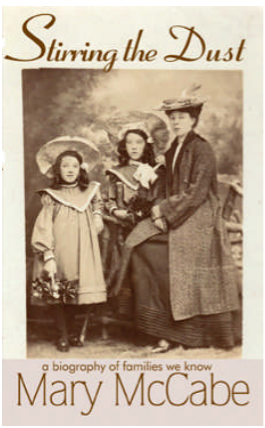 Stories and events in Stirring the Dust are unusual – a corpse is left unburied for fear of infection; there is a paranormal great-great aunt; there are bigamous and incestuous marriages; a runaway wife follows a gypsy rover. There are dramatic interludes including an earthquake and a mining accident. Settings range over 1906 San Francisco and 1920s Canada. The ten linked sections cover the 1830s to the 1960s and alternate between both sides of a family history. Mary McCabe should be ideally placed to write this narrative – it is her own family. Enveloping the Highland Clearances, Catholicism in NE Scotland, nineteenth century coal mines, camp followers in the Curragh of Kildare, life on board emigration ships, rural and tenemental living conditions in the 1800s – more than a family history Stirring the Dust is a superbly well-written narrative of modern Scotland that will resonate with many readers.

Alastair Mabbott of the Herald

Multi-generational family sagas often have a hint of the contrived about them, especially when certain characters have been shoehorned into the narrative to embody the social or political concerns of the era, or to mirror its demographic changes. There are no such issues with Stirring The Dust, which is based entirely upon the experiences of Mary McCabe’s ancestors. A family history given a fictional sheen, this book follows the travails of succeeding generations on her mother’s side (the Gardens, from Banffshire) and her father’s (the Morrows, originally from Argyll). She begins with a man in the 1850s who wanted to carve wood for the greater glory of God and ends up not far from the present day with the young Mary McCabe herself and her connection with Willie McRae, the SNP activist whose death from a gunshot wound in 1985 remains unsolved. With 150 years to encompass, few of the characters get enough space to themselves, but McCabe has, in her pen-portraits, imbued them with a vivid existence and ensured that their brief appearances make a lasting impact. Most memorably, there are the woodworker’s two children, who are put in their more prosperous uncle’s care, the girl eventually going to a French finishing school, while the boy reneges on his agreement to study for the priesthood; Bella, beaten by her husband, who walks out on her family and spends the next few years living rough as a tinker and thief before making her way back to her old village; and Mary, one of the many who pinned her hopes for the future on emigrating to Canada but found a shock awaiting her there. By the same token, the turning points of these ordinary people’s lives loom as significantly on the printed page as they would in a carefully plotted work of historical fiction. Many of these family tales could easily be expanded into full-length novels. The locations change, the professions change, the dialect shifts from Doric to Lowland Scots to Standard English. But the hardness of life, and the heartbreak of love, are constants. It’s almost like a Scottish answer to Alex Haley’s Roots (please don’t all pipe up “Hoots”), but none the worse for it.