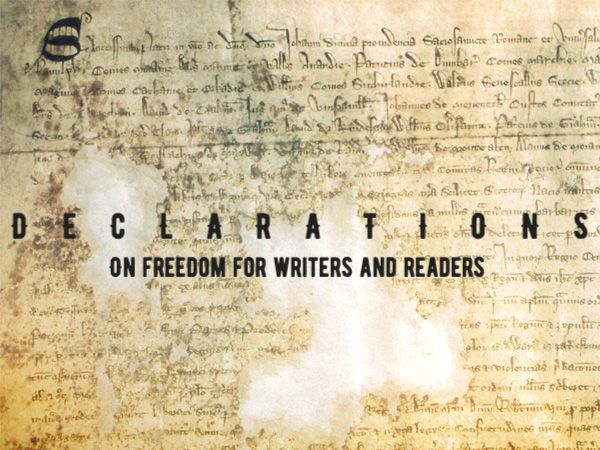 Declarations: On Freedom for Writers and Readers

Declarations marked the 700th anniversary of the Declaration of Arbroath and explored issues of freedom, independence and the free exchange of ideas. The anthology is available to purchase at the Scotland Street Press website.

“It is in truth not for glory, nor riches, nor honours, that we are fighting, but for freedom – for that alone, which no honest man gives up but with life itself”

The year 2020 marks the 700th anniversary of the Declaration of Arbroath in which the Scottish nobility appealed to the Pope to support Scotland in the nation’s fight for freedom from ‘the rule of the English’. The need to hear and understand each other is as urgent now as it ever was, for the nourishment of open minds and healthy democracies. Today, an issue vital for democracy that concerns the whole world is freedom of expression. Every day we hear of writers being silenced, by censorship, surveillance, imprisonment and sometimes death

PEN International has for nearly a hundred years been campaigning for freedom of expression. Scottish PEN has for most of that time contributed to that international effort defending the rights of readers and writers in Scotland and across the globe to speak out and speak up.

To commemorate this anniversary, Scottish PEN has brought together writing influenced by the Declaration of Arbroath for a collection of poetry and prose, with an award of three prizes of £250 for pieces selected by Scottish PEN and Sir Tom Devine.

This anthology aimed to bring together creative writing exploring a range of issues that could include exploring fights for freedom; the independence of thought, writing and reading; the consequences of censorship; the need for the free exchange of ideas; for supporting suppressed and marginalised voices; for enabling access to the written word; or the concept of ‘declaration’ and what it might mean in today’s world. We had over eighty contributions, some responding to particular events in Scottish history and others drawing on experiences in Myanmar and Mexico, southern Africa and Thailand, Ireland and Germany.

From the pieces published in the anthology, Professor Sir Tom Devine selected three authors to win a prize of £250 each for their work which resonated with the anniversary and captured the significance of the declaration for all present and future readers.

We are delighted to announce that the following writers and their pieces were selected:

Due to the COVID-19 pandemic, the launch event in Arbroath has been cancelled. The anthology is available to purchase at the Scotland Street Press website.

For more background into the anthology, check out the blogpost written by Scottish PEN Trustee and former President, Jenni Calder here: https://scottishpen.org/declarations-from-scottish-pen/