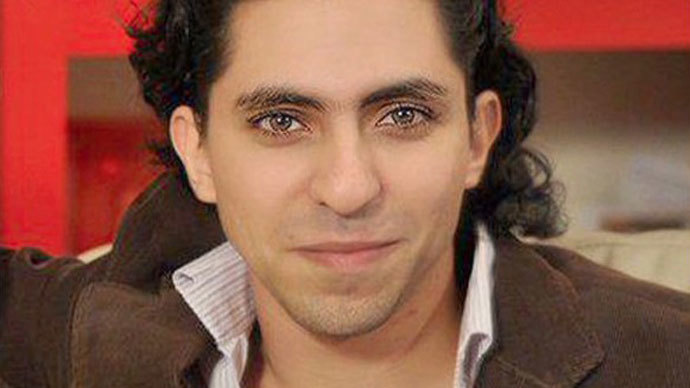 To write on behalf of Raif Badawi you can sign our online form letter or contact the Writers at Risk convener Jane Archer at janearcher22@yahoo.co.uk.

Raif Badawi was arrested in 2012 on a charge of “insulting Islam through electronic channels” for his blog and was brought to court on several charges, including apostasy, which would have brought a mandatory death penalty.

In 2013, he was convicted on several charges and sentenced to seven years in prison and 600 lashes. He appealed.

A year after his original conviction, in 2014, his sentence was increased to 10 years in prison, 1000 lashes, and a fine. The flogging was to be carried out over 20 weeks.

The first 50 lashes were administered publicly in a Jeddah square in January, 2015. The second flogging has been postponed more than twelve times, ostensibly for health reasons – Badawi is a diabetic of slim build and is known to have hypertension. His health, not surprisingly, is reported to have worsened since the flogging.

His lawyer, Waleed Abu al-Khair, is also in prison with a sentence of 15 years.

Ensaf Haidar, Badawi’s wife, and their three children fled to Canada after her life was threatened. At the PEN International Congress in 2015, Ensaf spoke, thanking PEN Quebec for their hospitality, moving a 250-strong conference to tears.

Raif Badawi has a special connection to Scotland as he stayed here in 2007 after previously being out of favour with the Saudi government.