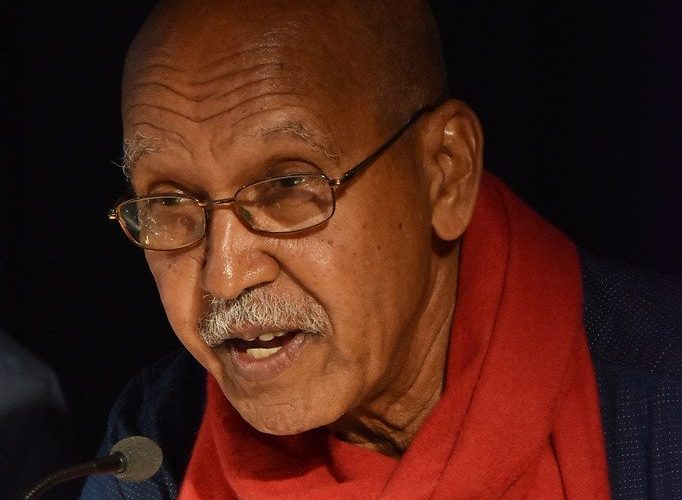 Nuruddin Farah is a Somali novelist. He has also written plays both for stage and radio, as well as short stories and essays.

Nuruddin Farah’s novels examine the dynamics of power in his native Somalia – the intricate realities of family and generational relationships, the clash of tradition and modernity, as well as crude and violent political power. He has been described as one of Africa’s greatest living novelists, in the running for a Nobel prize for literature.

Born in 1945 in what was then Italian Somaliland, he published his first novel, From a Crooked Rib, in 1970. Since then he has published over a dozen books, plays and non-fiction as well as novels. He is multi-lingual, speaking Somali, Arabic, Italian and English, but writes mainly in English, and has lived in nomadic exile since his second novel, A Naked Needle, appeared in 1976. His life has been shadowed by death threats and many dangerous episodes – in 1976 he was sentenced to death in absentia by the Somali authorities and on a return visit to Somalia 20 years later he was taken hostage by a warlord. He acted as a peace broker in Somalia’s civil war.

‘He is a man of quiet resilience, gentleness and incisive intelligence, with a deep commitment to the land of his birth’

Farah’s writing is courageous and forensic. It has a deceptively low-key resonance, underpinned by an irony that is both stark and delicate. He has produced three trilogies, the first comprising Sweet and Sour Milk (1979), Sardines (1981) and Close Sesame (1983). His Blood in the Sun trilogy includes Maps (1986) Gifts (1993) and Secrets (1998), followed by the three novels of Past Imperfect – Links (2004), Knots (2007) and Crossbones (2011) They chronicle a country broken by corruption and civil war, where individuals struggle against circumstances beyond their control. But they also reflect change and the long road towards optimism. In 2000 he published Yesterday, Tomorrow: Voices from the Somali Diaspora.

I met Nuruddin first in 1974, when he stayed with us in Edinburgh after attending a Commonwealth Writers’ conference at the University of Stirling. Since then he has made several visits to Scotland and launched his novel Crossbones in Edinburgh in 2012.  On one occasion he filled my young children with delighted admiration by staying up all night talking to a fellow house guest. There they were at breakfast time, still talking. He is a man of quiet resilience, gentleness and incisive intelligence, with a deep commitment to the land of his birth, all qualities manifest in his writing. He has lived and worked in many different parts of Africa, Europe and North America but his focus remains Somalia. ‘I keep my country alive by writing about it,’ he said.

Jenni Calder was for 23 years with the National Museum of Scotland, as education officer, Head of Publications, script editor for the Museum of Scotland (opened 1998) and Head of Museum of Scotland International. She has published widely on literary and historical subjects and writes fiction and poetry as Jenni Daiches. She has been an active member of Scottish PEN for over 30 years and president from 2007-11. Her latest book is The Burning Glass: The Life of Naomi Mitchison.