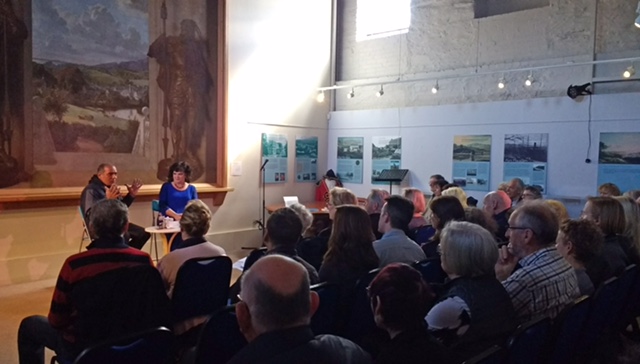 Ghazi Hussein took part in Scottish PEN’s event at this year’s Big Lit Festival in Gatehouse of Fleet, a joint Writers in Exile/Writers at Risk event chaired by Liz Niven. After performing several of his poems, Ghazi talked to Jean Rafferty about his years of suffering, not just in Syria but also in Scotland, where racist attacks made his flat in Sighthill more a prison than a home.

I am a terrorist.

The words, from the brown-eyed, brown-skinned man on the platform are what? chilling? provocative? angry?

The one thing the audience at the Faed Gallery know is that they are not true – the only weapon Ghazi Hussein has ever used in his life is the word.

Yet he has been imprisoned twenty-one times, beaten and tortured, and now lives in exile in Scotland.

Ghazi took part in Scottish PEN’s event at this year’s Big Lit Festival in Gatehouse of Fleet, a joint Writers in Exile/Writers at Risk event chaired by Liz Niven. After performing several of his poems, Ghazi talked to Jean Rafferty about his years of suffering, not just in Syria but also in Scotland, where racist attacks made his flat in Sighthill more a prison than a home.
At one time he wouldn’t even have been able to mention where he came from. When a Scottish newspaper made an innocent reference to it in 2003, Ghazi’s father was arrested and tortured by the Syrian authorities. Now his parents have moved to Turkey. They had left their home in Palestine to live in Golan Heights – ‘they thought they were there to stay,’ said Ghazi. Then the Israelis occupied and they had to move to another town in Syria. They thought they were there to stay too – until Syria’s civil war broke out.

The deracination and trauma Ghazi’s life has contained had a profound impact on the capacity audience. Gatehouse of Fleet is the sort of village you find in jolly television series on Sunday nights -ordered, peaceful, surrounded by beautiful rolling hills. Originally built for people who worked in the cotton mills and tanneries that grew up here in the Industrial Revolution, it now feels idyllic, a safe haven where people come to escape from urban living – or to comment on it; a high number of artists and bohemians live in the village. Chrys Salt and Richard Macfarlane, who run the Big Lit festival, have created a delightfully warm and informal atmosphere – several events were delayed a few minutes when people wanted to nick to the loo. ‘It’s that kind of festival,’ Richard said with a grin, as an eminent poet trotted back to her seat, a relieved look on her face.

Ghazi’s stories of torture and beatings seemed like stories from another, more dangerous planet – like ‘chicken grilling,’ where the person is strapped to a metal contraption, spun round like a chicken on a spit and beaten by guards. Or the ‘magic chair,’ where the body is stretched as if on a mediaeval rack, a punishment that has left Ghazi with chronic back problems.

One of seventeen children, he was first imprisoned at the age of just fourteen. A teacher at his local religious school told the children they should make efforts to see the people they loved, which inspired the young boy to visit a much loved aunt – who lived in neighbouring Lebanon. He took off without papers and without telling anyone where he was going, managing to get across the border unnoticed by the authorities. But on the way back, he was arrested and thrown into a tiny cell, where he stayed for the next six months.
Most people would have kept their heads down and stayed out of trouble after that but Ghazi studied philosophy and the politics of his country, trying to learn everything he could and eventually becoming a university lecturer and a poet. ‘I felt a responsibility,’ he said. Years of persecution, torture and imprisonment followed. He was considered ‘guilty of carrying thoughts’ though was never formally charged with anything, simply detained repeatedly and tortured. His first marriage broke up because his wife’s brother was a government official and it was impossible for her to remain married to someone considered a dissident. The family rather than his wife initiated the divorce.

In the midst of the pain and the stress of prison – ‘terror took lodging in my heart,’ says one of his poems – people hung on to scraps of hope to survive. A fellow prisoner told Ghazi about the woman he loved, carefully unwrapping sheet after sheet of paper to show him something of hers. Ghazi could see nothing at first but realised at last that the precious memento was a strand of hair. How had the woman sent it into the prison? ‘I found it in a loaf of bread,’ was the answer. ‘I haven’t met her yet.’

When Ghazi eventually escaped to this country with his two children, he was granted asylum in the UK because of the wounds visible on his body, but the scars on his mind run just as deep. ‘I am not exactly… stable,’ he says, searching for the right word. ‘And I have empathy. I feel for everyone.’
Yet he left people laughing with a story about his first neighbour in Scotland, a man standing at the lift of their block of flats with a big black dog. The dog came up to him but Muslims consider dogs unclean animals which should only be kept outside and Ghazi backed away.
‘Fuck off,’ the man said.
Does he think I am Russian? Their names all end with ov? wondered Ghazi.
‘Fuckin’ black,’ said the man.
As the dog was clearly black, Ghazi started searching in his pocket dictionary for the word ‘fuckin,’ concluding that it must be the dog’s name.
‘I can’t have Fuckin’ in my flat,’ he said.
‘Fuckin’ stupit,’ said the man.

Ghazi’s bravery and humour in the face of extreme cruelty made a deep impression on everyone in the room. But the event had more layers to come as it featured a number of readings from the new PENnings anthology, edited by our Writers in Exile committee from their online magazine, which comes out twice a year. Published this year to celebrate Scottish PEN’s 90th anniversary, it contains work by Scottish PEN members and writers exiled in Scotland.

Chair Liz Niven read the anthology’s title poem, I’m Coming With You, by A.C.Clarke, the originator of PENnings magazine, and her own moving poem, ‘The perfit sodger,’ about a child soldier laying landmines in Cambodia,
his wee wean’s finngers
perfit for the joab.’
Reaching across worlds was the theme of Elspeth Brown’s Enlightened, her touching tribute to a blind friend who tries to negotiate the two worlds of the blind and the sighted.
Are we worlds apart?
Words link us, we talks for hours

The final readings were from Donald Adamson, a Scots writer who divides his time between Scotland and Finland, where he used to lecture at the University of Helsinki. He read Finnish poet Eeva Kilpi’s beautiful poem about nature, A landscape blossoms within me plus his own Funny Stories, a dramatic poem about a mother in an unnamed country, reassuring her child that she wasn’t screaming when the men took her away – she was laughing at their funny stories.
After the event, people milled about talking about Ghazi Hussein and the terrible things that had happened to him, buying books of poetry. But words lingered – words that could get you tortured, words to console you, funny stories and terrible stories, the poem that wouldn’t go away but insisted on coming with you to wherever your new home was. It was words that stayed in your head, and words that will always bring worlds together.