I was quite surprised to get the call – or rather the email – inviting me to act as guest editor of the forthcoming issue of Scottish PEN’s online magazine. After all, I’m by some distance the least well-known of the three poetry-writing Rob M(a)ckenzies on the Scottish scene. So it was with a […] 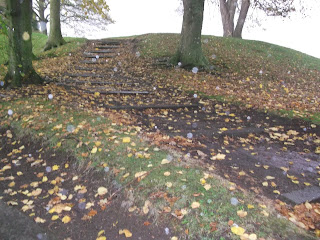 I was quite surprised to get the call – or rather the email – inviting me to act as guest editor of the forthcoming issue of Scottish PEN’s online magazine. After all, I’m by some distance the least well-known of the three poetry-writing Rob M(a)ckenzies on the Scottish scene. So it was with a mixture of curiosity and a little trepidation that I made my way down Lady Stair’s Close to the Writers’ Museum for my meeting with the three permanent editors – Anne Clarke, Linda Cracknell and Lindsey Fraser – to discuss the submissions we’d received forÂ ‘PENning Steps’. As I walked over the paving stones inscribed with quotations in the courtyard outside, then climbed the narrow stairway up to the Scottish PEN Centre on the first floor of the museum, I found myselfÂ wondering whether the local topography had had some influence on the choice of theme.

I’ve been involved in quite a few editorial meetings over the years but mostly in an academic context, where the rules of the game are slightly different, so I was a little unsure of what to expect. The one editorial session of a poetry magazine I’d attended had been conducted at breakneck speed, with unsuccessful submissions consigned to poetic oblivion in the twinkling of an eye – understandable, no doubt, given the sheer number of poems to be dealt with, but disconcerting nonetheless.

Our meeting was very different.Â We looked at the submissions in alphabetical order, with each of us taking turnsÂ to offer a first opinion, though an unofficial division of labour did begin to emerge, as Linda or Lindsey usually took the lead on prose fiction and Anne or I on the poems. Our deliberations often centred on the competing claims of relevance and literary quality. Of course there’s no reason why they need to compete and in many of the submissions, they didn’t. But there were a few poems that some or all of usÂ liked but which we felt had a rather tenuous connection with the theme: a sensitively-evoked woodland scene with the merest hint of animal tracks at the end; a self-portrait focusing, as you might expect it to, on looking and reflecting rather than on walking or climbing or dancing.Â Clearly, thematic relevance is to some extent in the eye of the beholder: an ingenious enough reader could find allusions to steps, literal or figurative, in the most unlikely places.Â Not that figurative treatments of the theme were a problem: we wereÂ quite readyÂ to followÂ characters or narrators up metaphorical stairways orÂ into imaginary gardens,Â with or without real toads in them. But doubts began to arise when they (the steps, not the toads) seemed to appear fortuitously or when we felt they weren’t fully integrated into the structure of the poem or story.

Our differences of opinion, about this and other questions, were often resolved by taking into account the overall balance of the issue, the echoes or links we could find between pieces. I was struck by how aware of this the other editors were, how their concern for composition and design extended beyond the boundaries of the individual poem or story. Of the other matters we discussed, two are especially worth mentioning. Linda drew our attention early on to the dearth of submissions, for this issue at least, by refugees and asylum seekers – in fact, there was only one. IÂ don’t think any of usÂ felt theÂ story in question was without its flaws, or at least rough edges, but it did explore areas of (largely painful) experience whichÂ broadened and deepened the thematic range of the issue. Then there was the language question: we received only one piece written entirely in Scots, though several of the stories used Scots in direct speech, in the time-honoured tradition of Scott and Stevenson. We were all impressed by the skill of that piece, how it managed to be both convincing and accessible.Â It’s probably worth reiterating here that the editors actively encourage submissions that reflect the linguistic and cultural diversity of contemporary Scotland.

I came away from the Writers’ Museum after the meeting with two things uppermost in my mind. The first was the confirmation of something I already knew but sometimes forget – that it can be a very illuminating experience to talk to other writers and editors and gain an insight into their perspectives and sensibilities, how they respond to a poem or story, what they find in it to commend or criticise. And the second thing? A heightened awareness of steps…

Click on the link below to read ‘PENning Steps’: