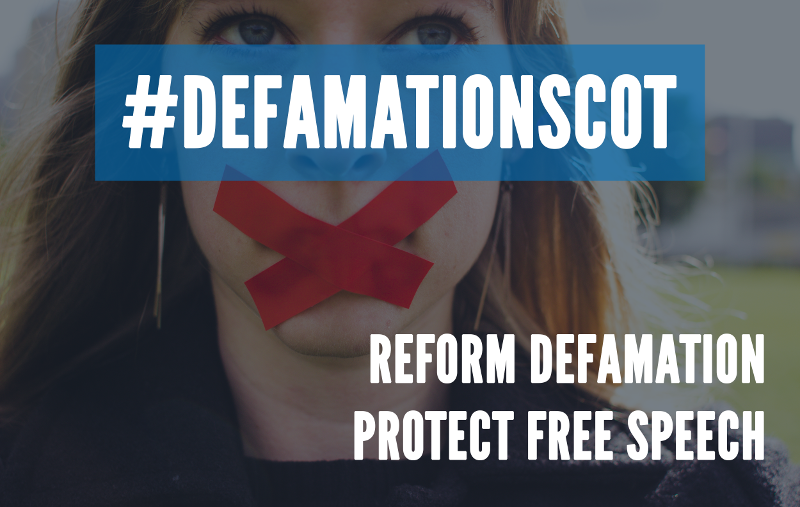 A new survey from Scottish PEN and the University of Strathclyde is seeking to establish the impact that Scottish defamation law has on writers, publishers and social media users.

A new survey from Scottish PEN and the University of Strathclyde is seeking to establish the impact that Scottish defamation law has on writers, publishers and social media users.

The survey has been produced as part of Scottish PEN’s wider campaign to reform defamation law in Scotland and is released as the Defamation and Malicious Publications (Scotland) Bill makes its way through the Scottish Parliament.

‘Our campaign aims to reform defamation law in Scotland so that it offers effective protection for freedom of expression and safeguards for writers against those with powerful interests seeking to silence reasonable comment. We want to ensure that the law reflects the modern media landscape and protects everyone, not only those with the money and resources to pursue vanity cases.

This survey offers an opportunity for people to share their experience of the law as it currently stands. We want to know if journalists, publishers or social media users have received threats of legal action, and better understand the toll this can take on writers’ ability to hold power to account. We hope that by building an evidence base, we can highlight issues of importance to writers, better understand how the current law affects people in various settings and make constructive arguments for change.’

The survey, available online now, seeks anonymous responses and takes around 10-15 minutes to complete. It includes questions around access to legal support, the risk of writers censoring the issues they explore in their work, and the impact that social media has on public discourse and threats of defamation action.

The survey also includes the opportunity to join a competition draw, where respondents have the chance of winning one of five £50 vouchers to spend at bookstores Topping & Company (based in Edinburgh and St Andrews) or Category Is Books (based in Glasgow).

The study is supported by the University of Strathclyde (Journalism, Media and Communication). Anonymised findings are due to be published later in the year.

Notes to the editor

Scottish PEN is a centre of PEN International and not-for-profit organisation that champions freedom of expression and literature across borders. It is a membership organisation and works with a range of writers, campaigners, activists and communities across Scotland and around the world.

About the University of Strathclyde (Journalism, Media and Communication)

The Journalism, Media and Communications subject has been a top-ranked programme in the UK for several years in a row. The subject offers a strong mix of practice and theory, with a special focus on industry relations.

There are four key areas which define this research at the unit: gender, political communications, social media and media, health, wellbeing and trauma.

About the Defamation Reform Campaign